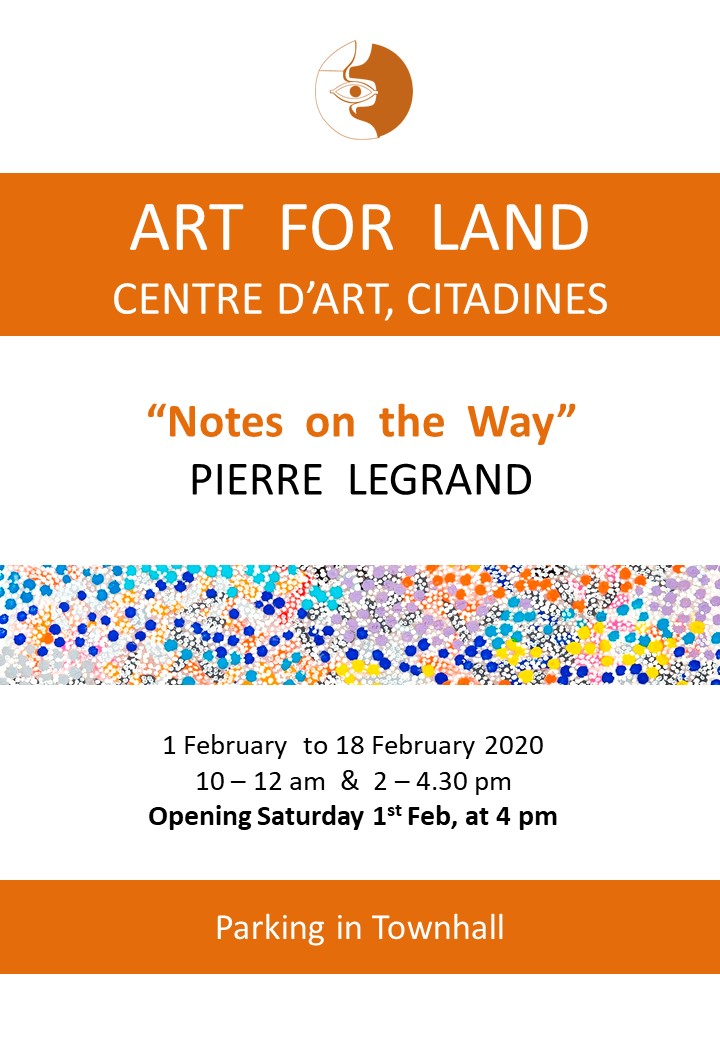 NOTES ON THE WAY

NOTES ON THE WAY- From 1st February, 2020, Pierre Legrand’s creations will dwell in the galleries of the Centre d’Art Citadines.

This exhibition, a logbook-like retrospective, marks a fundamental stage in the journey of the Aurovillian artist, who recently changed place of life and work. In the new studio, a minimalist space whose bare walls allow no distraction, a new creation naturally imposed onto him, along with the need to break free from the past. Pierre thus decided to bring together, in the two rooms of the Art Center, some of his old works and his most recent projects, covering a time span of 30 years. The proceeds from the exhibition will be devolved to ‘Art for Land’, an initiative to raise funds to purchase new land for Auroville.

You could say that ‘Notes on the way’ is a kind of rite of passage, the equivalent of a musical break in a symphony, like when you catch your breath before continuing an ascent, while taking a brief look behind to assess the distance traveled. These works witness an exploration of which the artist knows neither the term, nor the price, but only the stake, which is not free from doubts and questions.

He accepts the fact that he does not know. He goes through long periods of uncertainty punctuated, at times, by dazzling revelations in which he perceives in no time what, apparently, took him years to realize.In this flash, he understands that thirty years are just like a split-second, that everything is already there, but also that there is no shortcut, that he must install in the matter, groping day by day, the secret that is blinding us.

What connects the earthly, organic, almost monochrome works of the 90s and those of today, nearly impalpable structures – that no longer belong to painting, sculpture or true architecture, but are located in a transit area, rejecting all definitions – where pure colors dance with the joy of a bursting spring, is a process that could, perhaps, be defined as Darwinian.It is a vector, an instrument of the matter which seeks to flourish through him, that seeks and discovers itself and wants to manifest. “What I do – he says – is much ahead of me, it’s beyond me. It’s like casting something that pulls you, afterwards”. Rimbaud wrote: ‘Art is ahead’.

It is, therefore, a highly evolving work whose formal implications are multiple and unpredictable. Its route is not linear, and at times lends itself to diramations, similar to a tree whose growth is determined by the inextricable underground expansion of its roots. He tries out dramatic changes of scale, for example through the compound eyes of an insect with kaleidoscopic vision, or through a giant microscope; he studies gaps and perforations, as if he were an architect of non-spaces, through walls that are passages, sections of light which, in the clarity of dawn where the color vanishes, reveal underlying textures capable of mutations.

Pierre wants to get in touch with the consciousness of the cells, to let their breathing come to the surface. He had the intuition of a language of the invisible by inventing an alphabet which would speak to all senses, a writing in the form of a code that can be read at multiple levels, which would demonstrate the vibratory uniqueness of the universe.

Artaud spoke of a new language “to exorcise the separation of being, an original and universal language that can reconcile body and mind in an infinite work”.A creative creation that arouses the experience in the viewer, an autonomous entity capable of modifying the observer, a pulsating and contagious art which goes directly into the body and influences the cells – this is what motivates Pierre’s research.

“At the end of the 70s – he remembers – there were a few people in Auroville who, while doing apparently different things, were all working and looking in the same direction”. In that period, he had a very strong awareness of the existence of an Aurovillian art, of the fundamental importance of carrying on his work here.  As of today, that group has dispersed, but that hope, that vision, after all, has never gone lost: in Auroville there is still a pool of artists who, as if digging a tunnel and intermittently perceiving the light at its end, are in a tireless quest for the key, for the way to get to the other side.